Innovation on ice: Bladetech scores in the hockey world 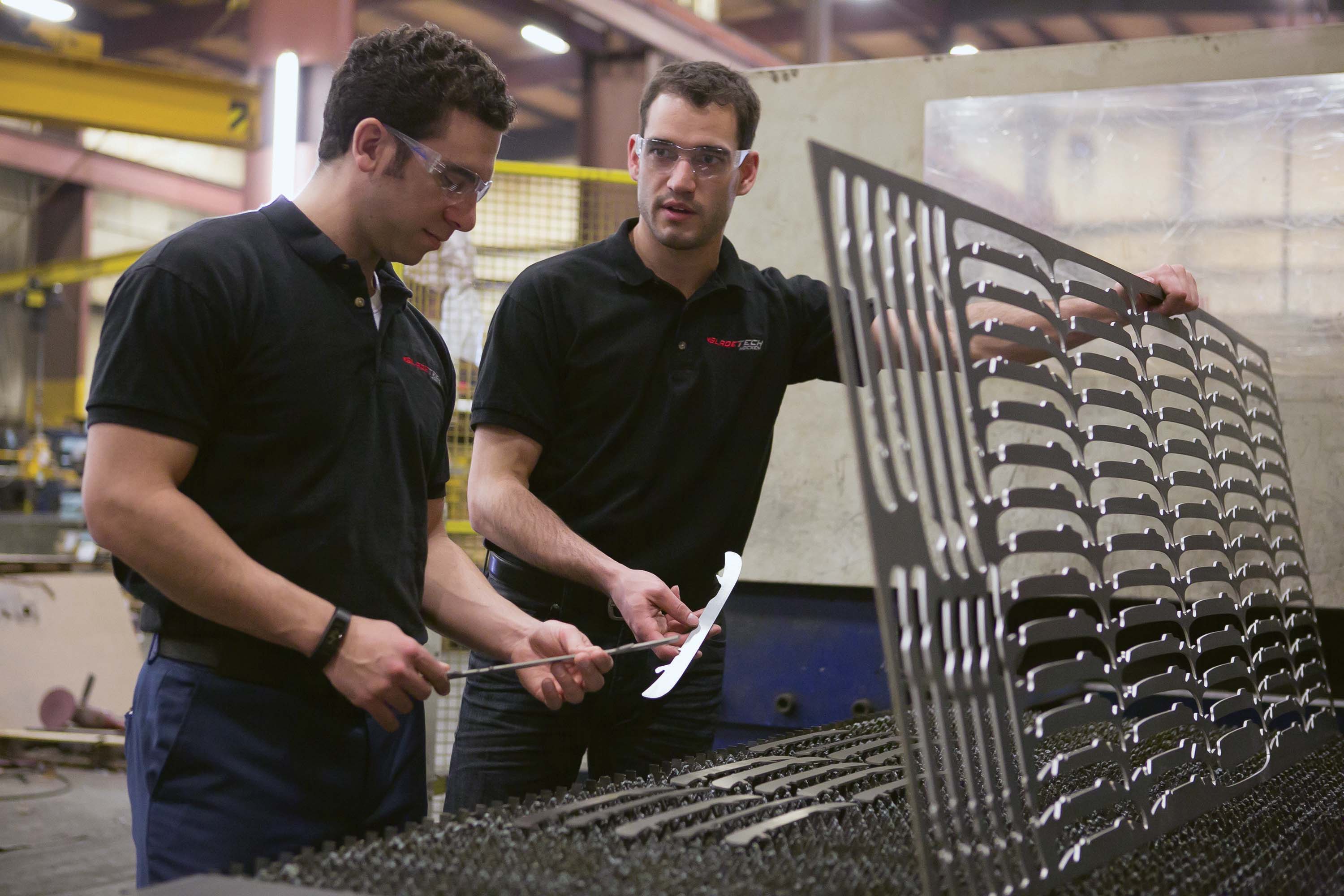 Throughout history, Canadians have been responsible for some of the world’s best inventions. They include the snowmobile, lightbulb, insulin and the telephone. Now Toronto-based innovators Jeff Azzolin and Anthony Morra are striving to add their Flex-Force skate blade to that list.

If the past year is any indication, achieving that dream could be within reach for Bladetech Hockey in the not-too-distant future. Since the beginning of 2016-17 National Hockey League (NHL) season, more than 30 players – including 15 wearing a Washington Capitals’ jersey – had tested out the duo’s leading-edge innovation in an effort to gain a competitive edge on the ice.

Dave Poulin, a retired Philadelphia Flyers’ player and current NHL hockey analyst, explains.
“When I talk to teams and equipment managers, they tell me they’re getting more efficient skating from their players using Bladetech blades,” he says. “They’re able to keep sharp edges without having too deep a hollow. It simply allows for a better glide.”

The company’s journey to get to this stage has been more like dig-and-grind hockey than a glide.
Azzolin, an avid hockey player, founder and now president of the company, became a student of the game at an early age. But instead of focusing on hockey strategy, he took a keen interest in equipment advances.

“When you’re a kid and start to buy equipment, you pay close attention to price,” says the 27-year-old Azzolin. “Equipment has changed dramatically over the years and become more expensive, but skate innovation has focused on making the boot lighter. I couldn’t understand why a skate that was 50-grams lighter was worth $500 more.”

That was the catalyst for a fourth-year engineering project at the University of Waterloo in 2012.

“My goal was to improve the hockey skate,” Azzolin adds. “So I focused on the holder and blade relationship, which has remained virtually untouched for more than 25 years.”

He discovered a relatively simple design – plastic holder and blade likely made of low-quality steel. Inspired by clap speed skating blades, he designed and engineered his first prototype featuring a spring-loaded blade, with a coiled spring under the balls of the feet, and a pivot mechanism in the heel.

“I couldn’t just tweak the design of the speed skate blade because there are so many other forces in hockey from stops, starts and turns,” Azzolin explains. “I had to look at different possibilities and develop a number of prototypes. It was a lot of trial and error.”

Azzolin relied on the feedback from both the men’s and women’s university hockey teams in the initial testing stages, as well as friends and family.
“I looked at the test results and realized that I was onto something – it was actually working,” he adds.

That early success prompted him to start Bladetech in 2013 and since then, the company has mainly focused on research and development. Currently on its sixth model, the springs have given way to the company’s proprietary Flex-Force technology that features a flexible blade.

“It works like a diving board: when one end has force, the other is free floating,” Azzolin explains. “When you press down, it flexes and then springs back like a slingshot and returns the energy to you.”
The result: increased speed and efficiency for a mere $140.

“The more strides a player takes, the greater the benefit,” says Bladetech CEO Anthony Morra, who joined the company in 2015. “Ten seconds into a shift, a player has already gained a full stride and this allows him/her to cover more ice over an entire shift using the same amount of energy.”

There are also health benefits. Flex Force eases wear and tear on a player’s’ joints including knees and hips. Depending on age and skill level, these innovative blades appeal to any hockey player for a variety of reasons.

“We have customers who are kids just starting hockey to beer league players and of course the elite pros,” Azzolin says. “Our blades appeal to any age and any level for a number of different reasons, but everyone sees increased speed, efficiency and the added health benefits as well as an overall, more durable product.”

With just two employees, the company is currently partnering with a metal fabricator in Cambridge, Ont. for the entire manufacturing process. But with growth, the company may bring the entire process in-house to increase its own speed and efficiency.

Creating that durable product begins with punching blades out of a sheet of steel that’s of a higher quality than traditional blade manufacturers use. They’re formed into the specific size and shape for each skate manufacturer’s specific plastic blade holder, then polished and finally treated.

While the manufacturing process is streamlined, the duo learned that in the world of business, specifically sales and marketing, the shortest distance between two points is not necessarily a straight line.

“The business end of Bladetech has been the biggest learning experience,” Azzolin admits. “You make assumptions and then they get thrown out the window. It really demonstrates the things you don’t know and how you need to adapt to things along the way.”

The company has successfully adapted to current market realities. While it expected retailers to be interested in the science and engineering behind the technology, the focus was more on testimonials and who was using the product.

That prompted Bladetech to eye the NHL market last fall.

“Instead of trying to slug it out solely through the retail route, we focused on the Holy Grail,” says Morra, 32. “We figured that validation from pro hockey players would unlock doors of opportunity.”

It did just that while providing another valuable lesson in the process.

“The hockey community worldwide is very close knit,” Morra adds. “Like any business, success hinges on the ability to establish and strengthen relationships. Those are the two biggest lessons we’ve learned.”

Bladetech’s solution was to target NHL team equipment managers, send them product samples and educate them on the competitive advantages of Bladetech’s skate blades over traditional blades.

“We were instantly solving a problem (for them) by demonstrating our blades need to be sharpened only half as much as traditional blades,” Morra says. “That definitely got their attention.”

“The amount of blades I have to change during games has drastically declined. Players tell me they notice the blades hold their edge longer and more thoroughly on turns, “ he says.

Bladetech has finally unlocked the retail market door and has struck a deal with a major distributor in Ontario, but the plan is to expand that reach across Canada and into the US.

The company has sold blades to customers in Europe and Japan through its online store and expanding its global footprint is in the immediate business plan.

“It’s like we put the cart before the horse,” says Morra. “We are focusing on the NHL and as a result, the US. But we plan to tackle any market where a steel blade hits the ice. We will be focusing on Europe in the next 18 months.”

“Hockey is becoming huge over there,” Morra adds. “They are putting a lot of money into the game and hiring a lot of Canadian coaches. China is a place that’s definitely on our radar.”
In the competitive global economic arena, succeeding in the world’s largest market for hockey gear doesn’t ensure a monopoly.

“We may not be global, but that certainly doesn’t mean we don’t face global competition,” Morra says. “Some of our biggest emerging competitors are in Korea and Finland right now, and we expect more. That’s why targeting the NHL was the main part of our business plan.”

“We’re always focused on continuous improvement. Working with NHL players this year has provided a lot of great feedback that will help us make improvements,” Azzolin explains.

“There will undoubtedly come a time for a another light bulb moment, but for now, we are confident we have the best product with the best technology on the market.”
And the duo hopes that its Canadian innovation changes the game of hockey the world over.

“We are selling a unique product that appeals to anyone who plays hockey, regardless of where they call home,” says Morra.

Their game plan also includes ongoing R&D in the short term with added tweaks that ensure Flex-Force remains on the cutting edge of innovation.