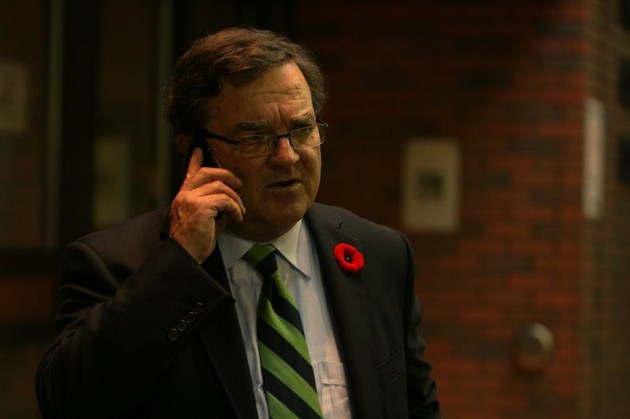 Jim Flaherty led the Canadian economy through the 2009 financial crisis and left cabinet in 2014 with the books virtually balanced.

TORONTO – Former federal finance minister Jim Flaherty is being remembered by the business community for his steady hand and determination through the recent financial crisis.

“He was a source of strength and financial leadership for the country during what was probably the most challenging economic period since the Great Depression,” said Gord Nixon, the head of Royal Bank of Canada.

“(Flaherty) provided great global leadership. I think he would be recognized by his peers as not just a source of strength to Canada, but a leading voice.”

Flaherty, 64, died suddenly Apr. 10 at his Ottawa home, less than a month after he retired as the Harper government’s first and only finance minister.

Until he resigned from cabinet last month, he had been the Harper government’s first and only finance minister.

He got the job in 2006 and held it through cabinet shuffles, economic turmoil and a bout with a rare skin disease that had him on steroids.

The condition was not thought to be life-threatening.

He spent eight years in the job, helping bring the economy through the banking collapse on Wall Street and the fallout from the disaster.

“My thoughts go to his wife, to the boys,” International Monetary Fund managing director Christine Lagarde said in Washington, where Flaherty was a fixture at G20 and IMF meetings. “He was a friend.”

Nasdaq commemorates Jim Flaherty at Times Square today because of his contribution to global economy. pic.twitter.com/7SHKtPvxnJ

Flaherty was born in Lachine, Que. in 1949. He attended Princeton University and then studied law at York University and worked as a lawyer for 20 years before entering the public service. Married to Conservative Ontario MPP, Christine Elliott, he was the father to triplet sons sons born in 1991.

As finance minister, Flaherty opened the spending taps during the economic crisis, running a $56-billion deficit, bailing out the auto sector and boosting the ailing economy.

He also became a leading voice during the global financial crisis and earned international recognition.

Politicians on both sides of the House of Commons and from across the country joined in celebrating Flaherty’s contributions to Canada on Twitter.

This spot, this place, won't ever be the same. Thank you Jim. pic.twitter.com/vac2tVOjZM

Deeply saddened to hear that Jim Flaherty has died – he was a tenacious, effective and dedicated politician who reached across the aisle.

Like all Canadians, I join in expressing my sadness at Jim Flaherty’s passing. My sincere condolences to @chriselliottpc and his children.

So sad to hear about the passing of a good friend, @JimFlaherty. A true loss for Canada.

Devastated to hear news of my friend Jim Flaherty passing. My prayers go out to Christine Elliot & family. The Ford family is heart broken

In recent years, he returned to his fiscal conservative roots with tighter spending intended to help return the federal budget to a surplus. Nixon said Flaherty wasn’t always easy to deal with because he “didn’t always see eye-to-eye” with banking executives, though they knew he was fair.

Flaherty rankled the Canadian investment community when he backed away from a campaign pledge by taxing income trusts like corporations. Bank of Canada governor Stephen Poloz said Flaherty left an important legacy of “fiscal responsibility and public service.”

“He devoted his life to Canada and Canadians,” Poloz said in a statement.

“His astute judgment, thoughtful pragmatism and strength of character inspired confidence during a period of profound uncertainty and economic risk,” said Manley, who was also a former deputy prime minister.

Dan Kelly, president of the Canadian Federation of Independent Business, described Flaherty as a “pragmatic politician” who saw his position as one that could make change.

“He recognized that being a politician was about more than passing laws and regulations,” said Kelly.

Robert Kennedy, dean of the Richard Ivey School of Business, remembered a speech Flaherty gave to students at the school in 2011 where he encouraged them to enter public service.

“(He said) ‘You will have opportunities to change the world around you in varying ways and to different degrees, large and small. It is the most satisfying and personally enriching career you will ever find,”’ Kennedy recalled Flaherty saying.

Former Bank of Canada governor Mark Carney said Flaherty had an “enormous influence” on global policy and on him personally.

“He was a man of principle who believed in fixing banks when they were broken, sound money and balanced budgets,” said Carney, who now heads the Bank of England.

Here’s a brief list of Flaherty’s accomplishments while in the public service.

“I know many colleagues will feel his loss and I will miss him tremendously.” – Mark Carney

In true Flaherty fashion, this was his final tweet on his last day in office March 18.

It has been an honour to serve Canada. Thank you for the opportunity. pic.twitter.com/vIbBNgT0wY

Take a look back at Flaherty through the years in pictures from the Globe and Mail.

CBC’s The National with Peter Mansbridge remembered Flaherty the evening of Apr. 10. Watch the video below.