How Trump’s tariffs are much bigger than Trump

Be prepared for digital economic nationalism, which is displacing liberal-internationalist globalization. 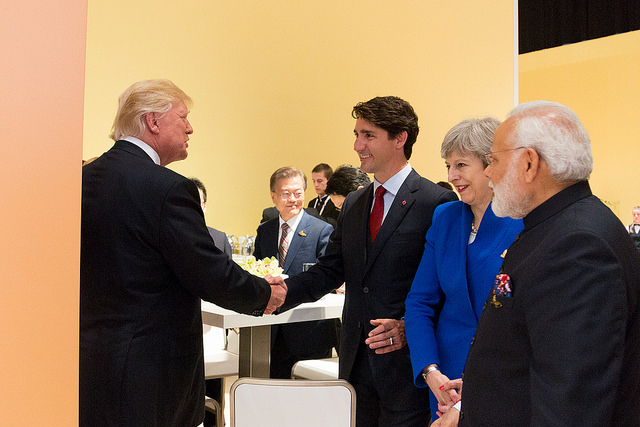 Everybody but US President Donald Trump and his supporters (who, lest we forget, number some 40% of Americans) has rightly condemned the United States’ imposition of steel and aluminum tariffs on Canada and other US allies as monumentally stupid.

The tariffs are expected to be a key topic of discussion at the G7 summit in Quebec kicking off June 8.

The pretense alone – that the tariffs are all about national security – is absurd and, as Prime Minister Justin Trudeau put it, “insulting.”

Trudeau has accurately called this moment a “turning point in the Canada-US relationship.”

But what kind of turning point are we at?

A few voices, such as James Nealon, the former US embassy deputy chief of mission, argue that Canada and the US have disagreed before and this, too, shall pass once Trump is gone.

Others, including Toronto Star columnist Thomas Walkom and Peter Donolo, director of communications for former Canadian prime minister Jean Chretien, opine that this signals the death of the North American Free Trade Agreement (NAFTA). Donolo argues convincingly that we have to realize that the US is now “an unpredictable and (economically) aggressive partner” and act accordingly.

Donolo and Walkom are much closer to the truth than Nealon, but even they understate somewhat the magnitude of what has happened here.

Trump has done more than wreck a trade agreement. He is playing executioner to the basic assumptions that has driven Canadian economic policy for the past three decades: That free trade and minimal government involvement in the economy can deliver prosperity.

This isn’t a problem that can be solved by Trump’s removal, because the underlying problem isn’t Trump.

Trump is merely playing out, in his ham-fisted way, two underlying trends: An increasing willingness by the US to impose unilaterally its will on its neighbours and a global rise in economic nationalism brought about by structural changes in the global economy.

For the past three decades, Canada has bet the farm on free trade as its guiding economic policy. Low trade barriers, and lots and lots of trade agreements were seen as the key to Canadian prosperity.

As a consequence of Canada’s geography, this liberal economic policy has meant a deeper integration into the US economy and the creation of a continental economic space, governed by NAFTA.

NAFTA was supposed to restrain the US protectionist impulses. But instead, it’s become abundantly clear how much of NAFTA’s success depends on the exercise of restraint of the US, which dominates North America.

America’s decision effectively to rewrite the rules on continental governance by imposing new security requirements on Canada and Mexico after the Sept. 11, 2001, terrorist attacks, showed the extent to which the United States calls the tunes in North America.

Successive Canadian and Mexican governments did their best to put a positive face on these changes and to accommodate US demands, even as the thickening of the borders imposed significant costs on all three economies.

The problem isn’t that the US felt insecure and wanted to do something about it. Instead, it’s that continental free trade simply can’t work when the most powerful partner constantly works to rewrite its foundations.

Trump’s current actions, supported tacitly by one of the two major American political parties, further demonstrate the folly of basing all your economic planning on the actions of a country that sees Canadians as outsiders.

On top of all of that, the global economy is also changing. We’re witnessing the rise of what I call digital economic nationalism, which is displacing the liberal-internationalist globalization that has dominated since the 1990s.

This change is partly tied to the relative decline of the US, which Trump has accelerated immeasurably.

The post-Second World War system, which was underwritten by the US, emphasized global rules and mutual economic gain through a liberalized trading regime. Trade, it was successfully argued, could be win-win.

By the 1990s, support for liberalized trade in Canada had been joined to a mistrust of government economic intervention. An industrial policy of state support for key industries was largely frowned upon as outdated economic nationalism.

That the US is undercutting this rules-based order through actions like the steel and aluminum tariffs is not news. Just as consequential, however, is the emergence of a global knowledge economy, which functions according to its own rules.

A knowledge economy is based on the control of knowledge, such as data and intellectual property. One of the key differences between this type of economy and one based on production and manufacturing is that knowledge economies seem to encourage winner-take-all outcomes.

Controlling data and intellectual property allows one to exert disproportionate influence over others: Witness the concerns over Facebook and smart-city projects like Sidewalk Toronto.

This reality may be why we are increasingly seeing what communication scholars Shawn Powers and Michael Jablonski call the “re-nationalization” of the global economy, of American Googles battling against Chinese Alibaba Groups. There’s a lot more that can be said here, but the key point is that economic nationalism is on the march.

It is comforting to think that if we can just survive the next two to six years of Trump, then things will get back to normal. This is a dangerous illusion.

The US and the world have moved on, and slavish devotion to conventional economic wisdom will not serve us well in this new world.

The first step is to see the world as it is now, and to act accordingly.

Blayne Haggart is an associate professor of Political Science at Brock University in St. Catharines, Ont. This article was originally published on The Conversation.


Related Stories
Trudeau can’t imagine Trump damaging US with auto tariffs
Trump plans to go ahead with steel, aluminum tariffs on EU
Trump’s tariffs: What they are and how they would work
Trump threatens more tariffs on US trading partners