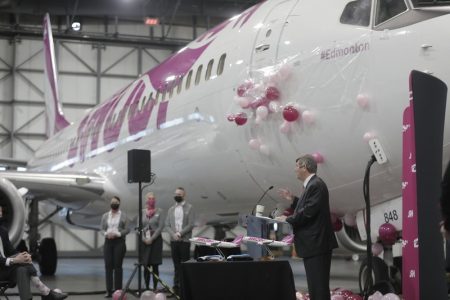 Swoop announced a new service to one U.S. and eight domestic destinations from its Western Canadian base.

The airline’s new investments were celebrated at Edmonton International Airport, alongside the unveiling of Swoop’s newest aircraft, which will fly with the name #Edmonton.

The airline’s growth will see Swoop’s flight capacity in Alberta’s capital increase 76 per cent compared to pre-pandemic levels, supporting the creation of 140 additional direct and spin-off jobs and an anticipated $120 million of economic output activity in 2022.

“This is a major milestone for Swoop as we underscore our commitment to leading the way for ultra-low fare air travel in Canada and reaffirm our position as the airline with the most destinations from Edmonton,” said Charles Duncan, President, Swoop. “With a strong focus on growth and Edmonton as our partner, we will continue to provide our travellers with more non-stop flights and ultra-low fares while supporting the recovery of Canada’s travel and tourism economy.”

The addition of eight new Canadian destinations to Swoop’s summer schedule will see non-stop service from Edmonton to Charlottetown, Comox, Halifax, Kelowna, Moncton, Ottawa, Regina and Saskatoon. Swoop will be the first carrier to bring non-stop connectivity from Edmonton International Airport to Charlottetown and Moncton and the airline’s summer schedule will also see the restoration of service to London, Ont.

Following the event, the Boeing 737-800 aircraft entered service for the operation of flight WO 770 departing Edmonton at 12:00 local time, en route to Phoenix (Mesa), Arizona with a scheduled arrival of 3:30 p.m. local time.