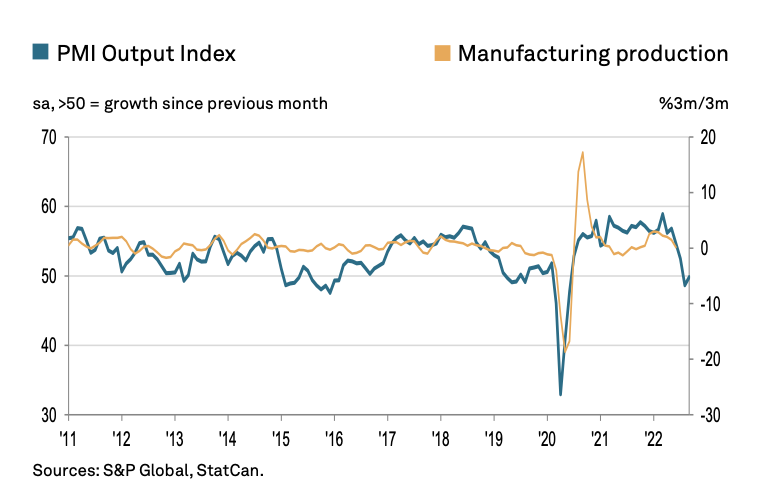 Canada’s manufacturing sector signalled a difficult month with output and new orders falling once again. Demand was hit by interest rate hikes and client uncertainty while firms grew less optimistic over their output expectations for the year-ahead.

The S&P Global Canada Manufacturing Purchasing Managers’ Index (PMI) registered at 49.8 in September, up from 48.7 in August, indicating a second monthly deterioration in manufacturing performance.

There were positives on the price front with both input price and output charge inflation easing to 22-month lows. There were still reports of rising wage and material prices, however.

A solid reduction in new orders was central to the latest decline. According to panel comments, interest rate hikes, and weak macroeconomic conditions led clients to refrain from placing orders. A similar trend was seen with regards to exports which declined for the fourth month running.

The lack of pressure on operating capacity across Canada’s manufacturing sector led firms to cut their headcounts, for the second month in a row. Canadian firms also attributed job shedding to cost-saving efforts.

With demand falling sharply, firms recorded an accumulation in post-production inventory holdings. The latest increase signalled three successive months of expansion, the longest sequence of growth for over eight years.

“The close of the third quarter yielded a mixed bag of results for Canada’s manufacturing sector with a back- to-back deterioration in operating conditions recorded during September,” said Shreeya Patel, economist, S&P Global Market Intelligence.

“Output and new orders continued to fall with the sector still feeling the repercussions of material shortages and delivery delays. Demand was once again hit by client hesitancy in the wake of rising interest rates and weak macroeconomic conditions. This led to a third monthly build-up of finished items held at Canadian manufacturing firms; the longest run in over eight years.”

Looking ahead, firms were still optimistic that their output levels would grow over the coming 12 months, but the degree of sentiment was the fifth-weakest since the question was first put forward in July 2012. Anecdotal evidence pointed to greater concerns over a recession. Rising interest rates and weak demand also weighed on confidence.